A Toyota Prius car parked in front of one of six commercial buildings in Muang District in Phayao caught fire on Wednesday morning. No one was hurt. (Photo by Saiarun Pinaduang)

The fire completely engulfed the Toyota Prius, registered in Bangkok, parked in front of one of the six commercial buildings on Phayao-Padaed Road in Tambon Tha Wangthong at around 6.30am.

Rescuers who rushed to the scene tried unsuccessfully to use fire extinguishers to put out the flames, as people living inside the buildings moved to safety. 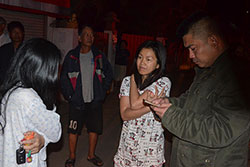 The owner of the car destroyed by the fire tells the police what happened. (Photo by Saiarun Pinaduang)

Later, fire engines arrived and crews took about 15 minutes to extinguish the blaze.

The owner of the car, Sureerat Takahashi, 50, told police she returned from Japan about 10 days ago and had not had a conflict with anyone. The car was parked in front of his commercial building. When it caught fire, she was inside watching TV.

She heard neighbors screaming that there was a fire, immediately went out to look and found flames erupting from the car’s engine. She went inside to retrieve the car keys to unlock it, but when she returned to her car, the fire had already spread throughout the vehicle.

While in Japan, the car was left unused in another house for several months before she returned home.

She suspected that rats may have poked the electrical wiring inside the vehicle, causing a short circuit. 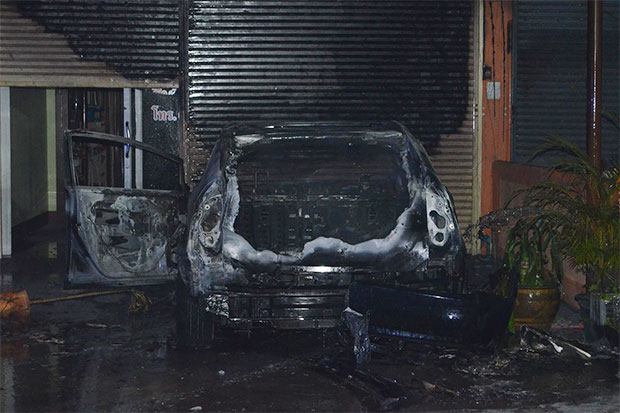 The Toyota Prius burned down after the fire on Wednesday morning. (Photo by Saiarun Pinaduang)